A blast to play

the game oozes with quality and style

Your Mission:
Destroy All Droids!

Discover a unique tactical arcade shooter, with the fun addictive gameplay of classics like Paradroid and Quazatron. You'll need your wits and the help of your acquired droid army to stay alive in this fast-paced retro actionfest!

Wreak havok through 50 atmospheric levels of destructible scenery, avoid mines and turrets, and battle 48 different robot types from lowly Guardbots to the latest in Assassins, Special Ops and Battledroids.

Build your squad of droids!

With the aid of your trusty transfer beam build up your own squad of droids, armed with the latest hi-tech weaponry including lasers, rockets, grenades, flamethrowers and disruptors, boost their abilities with 17 kinds of powerup, and take on the formidable giant boss 'bots!

There is so much to love about Droid Assault

I'd strongly recommend that you have a look

definitely worthy of my time

Your mission: infiltrate the malfunctioning Omnicorp facility and destroy all droids!

To get through the front door you'll need to use your unarmed Z-001 Virus Drone. Once inside you can use its transfer beam to implant virus control software inside an enemy droid.

You'll now be in full control of the enemy droid - and it's time to start shooting! Clear each level of enemy droids, using your new droid's weaponry or by transferring, and make your way to the exit.

Using your transfer beam you can take control of up to 8 droids. Switch between them and use their various abilities and weapons to help in your mission, clearing minefields, defeating armoured turrets and battling the fearsome GX-series Guardian droids.

Level up your Security Clearance!

Each droid had a security clearance level - collect transfer points to increase the strength of your transfer beam to take over higher level droids.

Starting with security level 1 and 2 droids like the G-series Guardbots and P-series Police droids, make your way up through M-series Military and A-series Assault droids, up to level 9 droids like the K999 Assassin!

NEW! IMPROVED! AND ON STEAM!

...and there's Steam support too!

Problems with enemy target recognition have been reported in our new line of nano-bots!

Due to an unauthorised office party at facility 54/NT.4 the recall notice has not been received, and presents containing deadly nano-bots are to be delivered to little orphaned children!

Destroy all the presents!

Your standard blaster isn't going to make much of a dent on some of Omnicorp's higher-spec droids. Fortunately their ballistics research department has been hard at work...

For rapid fire there's the Multi Blaster, or for brute force the Blast Cannon. For close combat there's the Spreader and Ripper Cannon, and the ultimate in indiscriminate carnage - the Auto-Ripper.

Omnicorp's ballistics research department has been hard at work!

Or skip the explosions and just set them on fire with a Multi-Melta!

Droids armed with Military Lasers make light work of most armour, and a droid armed with an EMP Disruptor is everyones least favourite guest at a crowded droid party!

Transfer to a high-spec droid and use their weapons against them... just try not to damage your target droid too much before you transfer!

There's also a whole range of powerups you can use to buff your droids' weapons, armour, drive and power.

For short-term boosts there are smartbomb, freeze and shield powerups, and the bezerk powerup turns even the lowliest droid into an unstoppable killing machine!

BUY DIRECT FROM THE HUMBLE STORE

Not a fan of Steam? You can now get Droid Assault from the Humble Store! 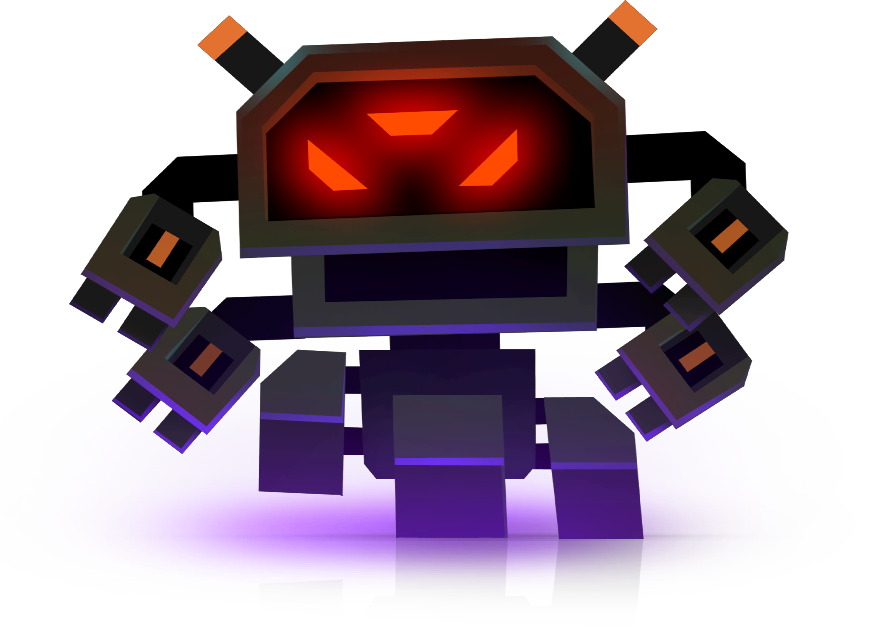